It's been ages, over 4 months I think. It's nothing short of scary how quickly time flies.  Writing to you all has been on my 'To Do' list for ages. Yet again, life just keeps getting in the way.

So here I am, alone in the house. I really should be cleaning out the rat cage, but I thought I'd take advantage of a quiet few moments and jot some thoughts down.

The other half is out walking the dog on the fells. Rather him than me - it's snowing on and off!! I got caught in a shower while I was out running errands this morning. How rude!? It's April for crying out loud!!
Still it's not that long ago we made a snowman in April 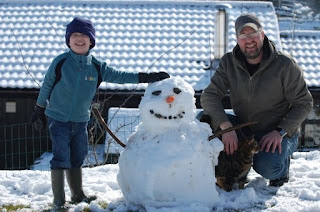 I just spent ages looking for this photo! Turns out it was from March 2008, so it wasn't April and it was quite a while ago. Matthew has returned from the fells saying it's too bloody cold up there and assures me that it did snow this time last year, because Facebook told him a snowy memory from a year ago!!

Any hoo!!
The boy is outside playing on his new Penny Board - it's a little skate board type thingy. I'm trying not to be an overprotective mother, but I'm quietly convinced that there will be fractures and A&E visits imminent.

So what have I been up to in the last four months?

I've been working obviously and there's nothing even remotely interesting to tell you about that.  I went on a jolly girls' outing to Edinburgh with my MIL. We had a wonderful time at Edinburgh Yarn Festival on the Friday and spent Saturday sightseeing before we returned home.

My only fibre event experience has been at Woolfest. I went to Edinburgh expecting something similar. It wasn't. It was smaller and was basically just a market. There weren't demonstrations or livestock, but what there was in spades was lovely retailers. I loved that there were designers there (I might have gotten a bit fan girl over Stephen West and Kate Davies!!), there was also foreign companies. I love that Woolfest celebrates all things British and fibre related, but sometimes I'd like to shop abroad. My philosophy though is that I'd rather spend my hard earned cash on yarn not import taxes and shipping so I rarely shop outside the UK. But at Edinburgh there was all sorts of companies I've coveted from afar. There was a stall selling bison which was soooo soft, but soooo expensive!!! Best of all there was the Wollmeise stand and it was a thing of beauty!!

Overall EYF was a good experience, I'm not sure it'll be an annual event for me, but I'll go again soon I'm sure. I'd like to take a class next time I think.

My  yarn haul was really rather modest. I bought 2 skeins of Wollmeise because it would have been rude not to, 2 skeins from EasyKnits, a set of Chia Goo sock needles and a pattern from Stephen West. All in all I think I was really rather restrained.

I've done myself an injury too since we last spoke. Way back in December I hurt my shoulder. Well, I say I hurt it, I didn't. It just suddenly started to hurt. I'd done nothing to deserve it, it just started to give me jip. The jip has continued and when I looked up the symptoms online (all hail Dr Google) I self diagnosed a rotator cuff injury. Apparently they can occur spontaneously which is rude in my opinion. I referred myself to our local physiotherapy outpatient department and the physio agreed with me. She gave me some exercises to maintain my range of movement while it healed......

It hasn't healed. It has steadily gotten worse. I now can't swim, I can't pull my bow, I can't spin and knitting is becoming more and more painful.

I've finally got an appointment to have a steroid injection in the joint, so hopefully that will help. To be fair to my physio she did suggest it at my first appointment, but I resisted. I can't see how an injection into my joint is going to help the ligaments and tendons surrounding it heal. The pain and the impact this is all having means I'm at the 'sod it, I'll try anything' stage. My appointment is this Tuesday, and it can't come soon enough.


Obviously I've still been knitting though, I just have to take lots of breaks.

I've got some stunning FO's to show for the last 4 months.

I'm most proud of my Knit n' Slide. The pattern was released exclusively for the Edinburgh Yarn Festival and I cast it on the second I got home. I'm trying desperately to use deep stash, so I used 2 skeins of Auracania 4 ply and a skein of Wendy Roam. The Auracania has been in stash for years. Both skeins were basically the same colours, just one was brighter than the other. Both were highly variegated and I just didn't know what to do with them, The Knit n' Slide was ideal. The body is knit with 2 colours and I knew these were the two I needed. When the body was blocked out the brighter of the 2 colours just popped!

The edging is something else. Holy picot cast off bat man! The edging consists of lots of clusters. There was over a thousand stitches in the end and manhandling them backwards and forwards over the needle was a nightmare. Then there was the picot bind off.  It took me 3 whole days! It very nearly sapped my happiness. But the end result was nothing short of stunning. 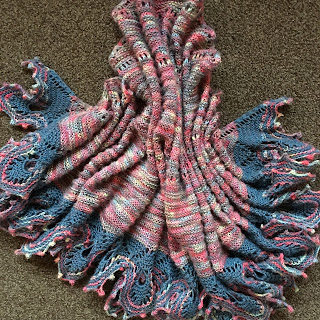 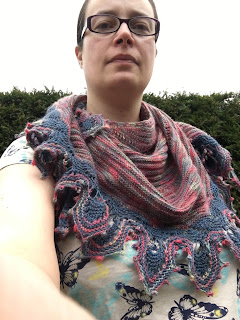 There are days I think selfie sticks are a good thing! My arms just aren't long enough. 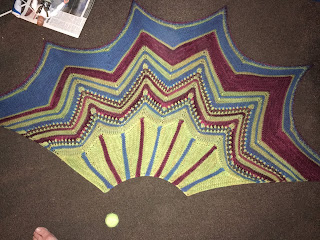 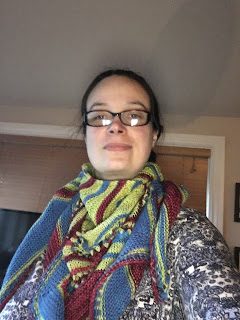 The biggest FO of the year has to be my Emyn Muil shawl. It's the latest in Susan Pandorf's Two Towers series. I've thoroughly enjoyed knitting her patterns and as soon as she emailed me to say the pattern was out I'd bought it and ordered the yarn. I decided to cast on on New Year's day. I wanted it finished to wear to EYF and I did. It's a large shawl and I love it. I even bought a new coat to go with it! 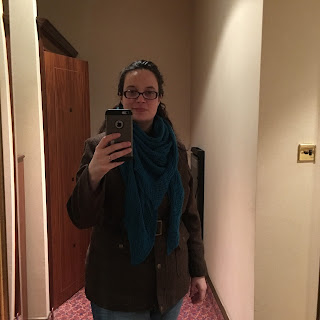 Here I am in our hotel room in Edinburgh

I have also fallen hard for the designs of Romi Hill. I found one of her patterns on a podcast. Amy Beth of the Fat Squirrel Speaks podcast was talking about The Shard. It's a fab pattern which uses space dyed yarn. Every time you knit to a certain colour of your yarn you make a shard. Using these shards and short rows you end up with a rather lovely asymmetrical shawlette. I gave mine to a friend for her birthday. I'll definitely be knitting another for myself. 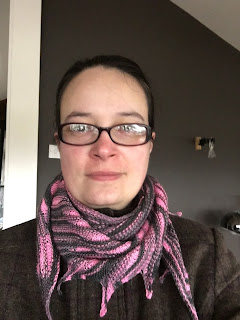 Not content with one of Romi's patterns I've also finished her Elven Closhe.  Even then I'm not done with my Romi crush.  I'm now 4/5ths of the way through her latest mKAL. The last clue came out Friday gone. I had a bit of a disaster in that I managed to mess up half way through clue 4 so I tried to do some major surgery - it didn't work. I thought I'd managed to move the pattern along slightly. What I'd actually done is add a bit! So when I ripped down and knit back up again I had lots of spare yarn that just wouldn't block out.  So 12 rows got ripped out. It took me a while to figure out where exactly I'd ripped back to, but I'm back on track and halfway through clue 4. I'm enjoying the knit and I'll chug along until I'm done. 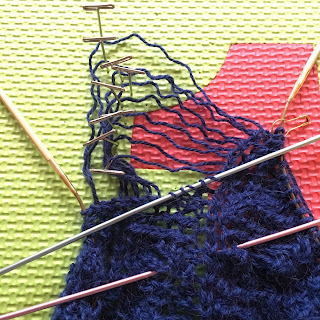 Disaster struck, but sometimes you just have to bite the bullet and rip it back!

Other WIP's feeling the love recently include socks. I've got 2 different socks on the needles. I'm knitting as I walk. Because I now can't do any of the exercise I enjoy, I've decided to walk to work. I must confess that I'm a fair weather walker. I don't mind walking home in the rain, but I'm not walking to walk in the rain! So I've walked 3.4km to and from work a few times a week. And walking for 40 minutes each way gives some good knitting time. When I'm walking, I'm knitting on vanilla socks. It's easy to knit and walk on vanilla socks because I don't need to look at what I'm knitting. The first pair I knit was given to my MIL. I used British Bea Knits self striping yarn in the Devilment colourway. I decided to do a slip stitch pattern when the colour changed. Snag was it made the sock a bit tight. But on the bright side, it made them the perfect size for my MIL! Win!! They took me a couple of weeks of walking, but to be honest, I had started them before I started walking. My current pair of walking socks are Austermann Step. It's a really nice yarn. Nothing fancy, I'm just working through my rather substantial sock yarn stash. This time, they are a pure vanilla sock.

Because sometimes I need a sock with a bit more oomph I'm working on my next pattern. I hope you'll like them. They're a simple repeat and are just enough work to keep you interested without being frustrated by it. I'll keep you posted with my progress and when I expect to get it published.

The whole point of this blog.

My Ravelry library contains a staggering 384 patterns! I keep finding beautiful patterns and not knitting them! I have 24 pattern books saved! Granted some of these are magazine digital downloads and technique books, but even so I have 14 pattern books of patterns at some point I've wanted to knit. So I've decided to start at the beginning. My first ever pattern book was Hitchhiker- a trilogy of four patterns. I've already knit Hitchhiker so I've cast on Trillian. I plucked up the courage to use one of my sacred Wollmeise skeins. They've only been in stash a few weeks, and to be honest, I wanted to pet them a while longer; but Martina likes to use Wollmeise for her patterns because they are a 150g put up and those extra 50g gives a lovely sized shawl. It had to be done, and I love the colour. It's the Pfauenage colourway and it's gorgeous jewel tones of purple, blue and green. It's a great knit, and I'm enjoying it a lot.

I'm going to plod my way through all of my knitting books and knit the lovely patterns that turned my head over the years.

What about you? Do you fancy knitting your library? Come on! Join in! Tell me what your plans are.

Well, I think I'm done for now. I'm going to sign off and I hope I'll be back sooner rather than later to keep you posted on my progress.

Where I'm up to