I will be charging for autographs

How are you all keeping? I am well.

The sun is shining as it has pretty much all week. It's been gloriously warm in sunny Cumbria this week. Needless to say it turned chilly on Friday, just in time for the weekend, but at least the sun is still in a mostly blue sky.

There is nothing in this whole world that beats getting two loads of washing dry on the line by lunchtime now is there?!

It's been a rather fabulous week here. Well, work has been utterly uneventful (which is fabulous, trust me!). The Monday after I wrote last we all trolled a few juctions down the motorway to visit 1818 Antiques. They had a general sale and a music sale on. Matthew decided we should go and have a look.

We had browsed the catalogue before we set off and had an idea of some items we'd like to have a go bidding on.

This was our first auction (not the last!!) so our adrenaline and excitement levels were high..... well, mine and Matthew's levels were high. Ben was utterly nonplus . I must say at this point though, that Ben was so very patient. He wasn't overly keen about going, he was ripped from his bed at 7am so that we could set off by 9. There was an item he liked, but other than that he'd have much rather stayed at home and played on his X-box.

I registered for a bidding card and we had a first hand look at the items we'd decided to have a go at winning.

Here's were it gets good........ this auction was going to be filmed!!!! Antiques Road Trip was calling in and auctioning off the items the contestants had bought during that leg of the trip. Matthew and I had spent some time looking at the catalogue trying to work out which items might have been bought by the celebs. Matthew had a good idea, and liked the look of one of the items.

In the end, we'd decided that we were going to bid on a microscope (for Ben) , a canteen (for Ben to store his precious things in), a pewter plate (Matthew thought this was a Road Trip item), a mixed lot of jewellery (there was a couple of rather nice stones in amongst some tat),some rather tatty looking bits of watch (because Matthew liked the look of one of the watches), and a hi-fi system.

We sat down ready for the auction to begin. In front of us and slightly to the left was some reserved seating which was obviously for the turns. I worked out that we'd be out of shot and that was fine by me. I got comfy and got out my knitting.  Well, what self respecting knitter would head out for a day sat down and not bring a knitting project!?

So the auction began. It was really rather good! Even though Matthew did most of the bidding for us, I enjoyed the thrill of the chase. About halfway through the celebs appeared and we knew their items must be coming up. I liked the look of a little lead token. It had a cute donkey on the front of it. It had an estimate of £30-50. The bidding started and at the last minute I decided to have a go. The bidding got to £40 and I stopped, I really didn't want to pay more than that for it. I carried on knitting. A couple of minutes after the item finished, a young lady with a clip-board approached me and said that the token had been one of the items on the show, and they'd filmed me bidding! I had to sign a form saying it was ok for them to include the footage.

Matthew set about bidding for the plate and won it! He signed his form and lo! We're both going to be on telly!!!!!! If you form an orderly queue I'll sign autographs ;-)

The program will air in September this year, so you all need to keep your eyes peeled for the mad knitting lady in the centre of the room!!

While the auction was on, Matthew decided he'd like to get the autographs of the 2 contestants but we didn't have a pen. He wouldn't go find one, so that was the end of that.
Ben was starting to get fidgety, and we'd bid on most of the items we wanted, so I took him for a wander outside.
Out in the carpark I saw the 2 gents in question having a cup of coffee. Now at this point I should point out that I am not in the habit of harassing strangers. My idea of celeb spotting is to spot them, say "OOH, there's such and such!" and let everyone else go get selfies and autographs. Well, this time I don't know what came over me! I grabbed Ben, and went and said hello. I was apologetic (ish) about interrupting their coffee break, and asked for a photo. They were most obliging and lovely fellows 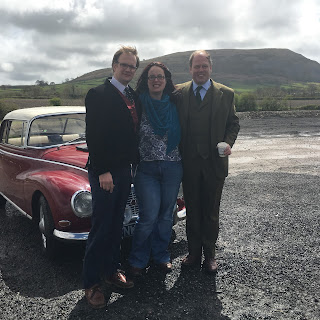 Here I am with Charles Hanson on the left and James Braxton on the right. All round good eggs!

You are unlikely, however, to see my son. He was there for the whole day, but this is the view we had of him 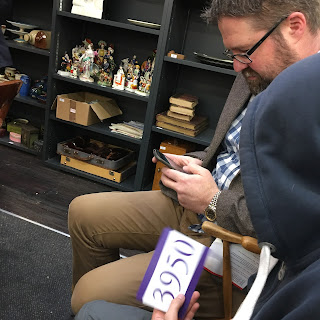 Ah well, at least we got him there and he was so good about spending the WHOLE day there!

So onto the crafting

My walking *2 socks felt most of the love that Monday. As I said last time, I've got 3 pairs of socks on the go right now, but I wanted to take a pair of socks with me that I didn't have to look at so I could take in all the sights and sounds of the auction. These socks were just at the right point for the trip. I turned the heel on the journey down, and knit the whole leg while we were there! I was so chuffed. 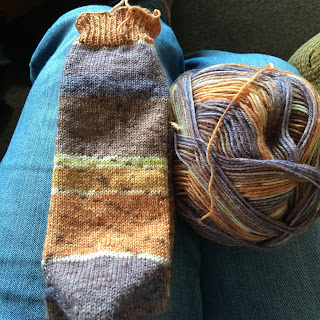 I have since cast on the second toe and I'm slowly working up the foot.

I must confess to having a serious case of second sock syndrome! All three of my sock projects are on to the second sock and I want to work on none of them!

I place the blame for this squarely on the shoulders of Zena aka Little Yellow Uke. In her last episode she talked about wanting short ankle socks for summer. I promptly decided that I must have ankle socks too!! I went stash diving and came up with 2 gorgeous skeins. I must confess now, that I can't remember where I got them from. I think it was a dyer who'd posted on facebook about a sweetie themed box. I just can't for the life of me remember who it was so I can't link them here. If anyone recognises the skeins, please let me know and I'll put a link here for others to find her yarn because it is truly gorgeous! 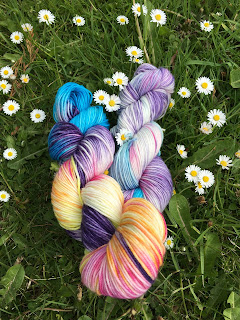 I made myself promise that I had to clear some WIP's before I can cast on my shortie socks.

I do have an FO for you this week.

I told you last time about Nebulae. I'm so happy that I now have a lovely shawl. I must confess to having doubts that ripping the whole Wingspan shawl out was the best idea, but now Nebulae tells me I made the right decision. The prompt for the KAL was reach for the stars so to add extra sparkle to my Nebula I added beads. I had some 8/0 beads in stash and to be honest they're a bit too small for fingering weight yarn. Some of the beads had too narrow a hole to go over the stitches. I beaded the first K2tog on each row and I think it just gives a subtle twinkle to the finished object. 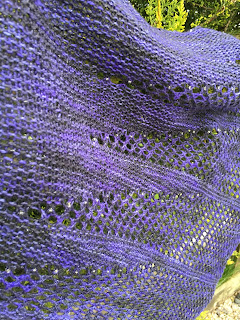 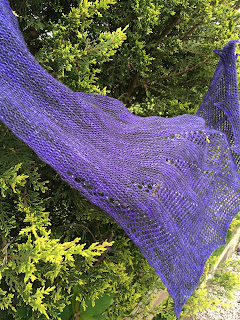 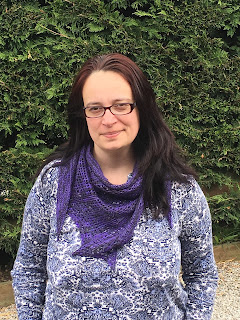 My poor WIP bag has seen no action at all. I just have no desire to work on the projects in it. BUT! I did pull one project out and frog it. I had set about knitting May Morning by Lost City Knits back in May last year while I was on holiday. It's a lovely triangle shawl with a repeating leaf pattern all over. I chose it last year to make good holiday knitting - a simple repeating pattern and beads to add some interest. I worked on it on the flight home and kept on knitting until it was about 10 inches deep. Then I put it away to work on something else. Since then it just hasn't floated my boat. I've picked it up and put it back down untouched more often than is funny!

Then I got smacked in the face by another stunning Romi Hill pattern! She runs a Pins and Lace club each year. Now this is well out of my league as the yarn, shawl pins and patterns are expensive to import into the UK, but the ebook with the patterns only is more than a good buy. I came across Romi after the first Winter pattern was published, but she release the new Spring pattern last week. It's called Emerald Deep and it's nothing short of breathtaking. I called my project Citrine Deep because my yarn is lovely shades of yellow and green that remind me of citrine stones. The beads match perfectly and I'm too excited for words about knitting it. 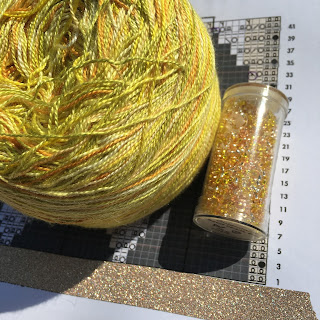 Of course sparkly gold washi tape is a must-have for this project!

As soon as the pattern was released I just had to work on it. 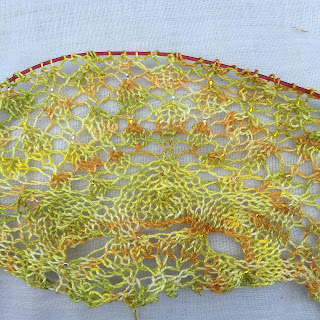 The pattern doesn't call for beads, but I decided to bead all of the 3 stitch decreases. I finished the first chart and I'm smitten. I desperately wanted to carry on, but I made myself put it down to finish Nebulae.

Now, however, Nebulae is finished and as soon as I press the publish button here, I'm going to set about knitting the second chart.

I think I'll have to ration myself. I must finish one of my languishing second socks before I move onto chart 3. Another sock before chart 4,etc etc.

I'm in no real rush to finish this, so I really must make sure I get the less sparkly projects finished too,

As I mentioned last time, I am knitting 2 pairs of the same sock pattern. It's my latest pattern and I released it yesterday. It's called A Path Less Travelled and I'm really happy with how it turned out.

I'm offering a coupon code for the rest of May - type 'path2016' at the checkout and the pattern will be yours free, gratis and for nothing. After that it's £1.80. I do hope you like it as much as I do. Please spread the word about the socks and the coupon!

I will finish some socks (maybe)
I will work on my poor Trillian which has felt no love all week (definitely)
I will work on the stunning fabulousness that is my Citrine deep (hell yes!!)

Well, I need to get a wiggle on. It's just dawned on me that I need to go do the recycling before I can settle down to some serious lace knitting!

I hope you all have a fabulous fortnight

Where I'm up to